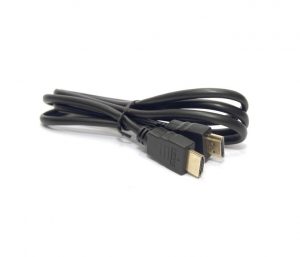 HDMI is the standard in today’s world when it comes to video cables. The word stands for high definition multimedia interface and it is used to transmit high-quality video as well as audio. HDMI cables come in many different forms, each of them having similar functionality but designed to meet certain standards when it comes to performance. For regular consumers, the different HDMI cable types may be a bit confusing. To avoid confusion, the HDMI organization made it mandatory for manufacturers to simplify the labeling of their different cables according to what it is being used for. The new form of labeling was put into practice in late 2010.

This cable is the most common type of cable that is mostly used by the masses. This type can transmit HD resolution to most displays, from computer monitors to cable/satellite television, as well as gaming consoles. The standard cable can handle most tasks very well if the cable length is under 6 feet.

Wireless internet has greatly changed the way that information is distributed, however, it still does not compare with a wired network. Besides the fact that HDMI delivers high-quality video and audio, an HDMI with Ethernet can also deliver great network speeds. For this type of cable to work properly, the devices that the cable is connected to must be HEC compatible.

This cable type of HDMI is designed to be used in vehicles that are equipped with high definition video systems. A car’s engine temperature fluctuates between cold and hot and the automotive HDMI cable can withstand these extremes, as well as other extremes generated by the engine of a vehicle.

Delivering resolutions higher than 1080p requires higher bandwidth and in this case, the standard HDMI cable is replaced by the high-speed version HDMI 2.1. Besides being able to transmit 4K signals, the cable can top support other advanced features such as 3D and Deep Color. For gaming and tech enthusiasts looking for a great 4K gaming experience, the high-speed HDMI is a must.

Same as the high-speed HDMI, this type can deliver amazing performance as well as internet speed of up to 100Mbs. Together with great performance, this cable comes with its dedicated data channel, known as HDMI Ethernet Channel. Same as the standard one, the devices must be HEC compatible to be used.

Similar to the standard automotive HDMI, this cable is designed for use in vehicles with a high definition video interface. What makes it different is that it can deliver higher resolutions as well as the other display technologies such as 3D.

The last one to top them all, the ultra-high-speed HDMI cable delivers the best video and audio performance. The cable can effortlessly transfer signals up to 8K video resolution as well as support for HDR and the signal is also the less susceptible to nearby wireless devices.

The future of HDMI is uncertain. The main issue that HDMI faces is the transfer of data over longer distances. This is was a common issue for VGA cables as well. There is a lot of information when it comes to HDMI technology. Besides the different types of cables, there are also different types of connectors which could be explored further in another article.